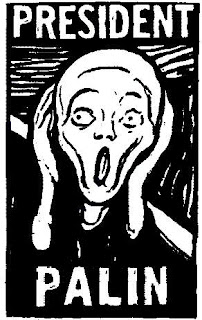 “They are also building schools for the Afghan children so that there is hope and opportunity in our neighboring country of Afghanistan.” –Sarah Palin, speaking at a fundraiser in San Francisco, Oct. 5, 2008

“There’s a place in Hell reserved for women who don’t support other women.” –Sarah Palin, misquoting former Secretary of State Madeline Albright, who said women should “help” other women,” Carson, Caliif., Oct. 4, 2008
“I may not answer the questions that either the moderator or you want to hear, but I’m going to talk straight to the American people and let them know my track record also.” –Sarah Palin, on not answering the questions in the vice presidential debate, St. Louis, Missouri, Oct. 2, 2008
Katie Couric: “What other Supreme Court decisions do you disagree with?”Sarah Palin: “Well, let’s see. There’s –of course –in the great history of America rulings there have been rulings, there’s never going to be absolute consensus by every American. And there are — those issues, again, like Roe v Wade where I believe are best held on a state level and addressed there. So you know — going through the history of America, there would be others but–“Couric: “Can you think of any?”Palin: “Well, I could think of — of any again, that could be best dealt with on a more local level. Maybe I would take issue with. But you know, as mayor, and then as governor and even as a Vice President, if I’m so privileged to serve, wouldn’t be in a position of changing those things but in supporting the law of the land as it reads today.” –unable to name any Supreme Court decisions other than Roe v. Wade, CBS News interview, Oct. 1, 2008 (Watch video clip)
Katie Couric: “And when it comes to establishing your worldview, I was curious: what newspapers and magazines did you regularly read before you were tapped for this to stay informed and to understand the world?”Sarah Palin: “I’ve read most of them, again with a great appreciation for the press, for the media.”Couric: “But, like, what ones specifically? I’m curious.”Palin: “All of ’em, any of ’em that have been in front of me over all these years.”Couric: Can you name a few?Palin: “I have a vast variety of sources where we get our news too.” –CBS News interview, Oct. 1, 2008 (Watch video clip)
“I’ll try to find you some and I’ll bring them to you.” –Sarah Palin, asked by Katie Couric to cite specific examples of how John McCain has pushed for more regulation in his 26 years in the Senate, CBS interview, Sept. 24, 2008 (Watch video clip)
“Well, it certainly does because our — our next door neighbors are foreign countries. They’re in the state that I am the executive of. And there in Russia … We have trade missions back and forth. We– we do– it’s very important when you consider even national security issues with Russia as Putin rears his head and comes into the air space of the United States of America, where– where do they go? It’s Alaska. It’s just right over the border. It is– from Alaska that we send those out to make sure that an eye is being kept on this very powerful nation, Russia, because they are right there. They are right next to– to our state.” –Sarah Palin, asked by Katie Couric how Alaska’s proximity to Russia gives her foreign policy experience, CBS interview, Sept. 24, 2008 (Watch video clip)
“That’s exactly what we’re going to do in a Palin and McCain administration.” –Sarah Palin, elevating herself to the top of the ticket, Cedar Rapids, Iowa, Sept. 18, 2008 (Watch video clip)
“I’m the mayor, I can do whatever I want until the courts tell me I can’t.'” –Sarah Palin, as quoted by former City Council Member Nick Carney, after he raised objections about the $50,000 she spent renovating the mayor’s office without approval of the city council”I watched with the volume all the way down. I thought it was hilarious. I thought she was spot on. … It was hilarious. Again, didn’t hear a word she said, but the visual, spot on.” –Sarah Palin, on Tina Fey’s “SNL” skit interview on FOX News’s “Hannity & Colmes,” Sept. 17, 2008
“Oil and coal? Of course, it’s a fungible commodity and they don’t flag, you know, the molecules, where it’s going and where it’s not. But in the sense of the Congress today, they know that there are very, very hungry domestic markets that need that oil first. So, I believe that what Congress is going to do, also, is not to allow the export bans to such a degree that it’s Americans that get stuck to holding the bag without the energy source that is produced here, pumped here. It’s got to flow into our domestic markets first.” –Sarah Palin, billed by John McCain as the nation’s foremost expert on energy, clumsily answering a question while speaking off the cuff at a town hall meeting, Grand Rapids, Michigan, Sept. 17, 2008
“The fact is that Fannie Mae and Freddie Mac have gotten too big and too expensive to the taxpayers.” –Sarah Palin, on the two companies which are in fact private entities, Colorado Springs, CO, Sept. 13, 2008″They’re our next door neighbors and you can actually see Russia from land here in Alaska, from an island in Alaska.” –Sarah Palin, on her foreign policy insights into Russia, ABC News interview, Sept. 11, 2008″Nucular.” –Sarah Palin, mispronouncing the word “nuclear” twice, ABC News interview, Sept. 11, 2008
“Perhaps so.” –Sarah Palin, when asked if we may need to go to war with Russia because of the Georgia crisis, ABC News interview, Sept. 11, 2008
“I have not, and I think if you go back in history and if you ask that question of many vice presidents, they may have the same answer that I just gave you.” –Sarah Palin, after being asked if she had never met a foreign head of state, despite the fact that every vice president in the last 32 years had met a foreign head of state prior to taking offic
e, ABC News interview, Sept. 11, 2008
“In what respect, Charlie?” –Sarah Palin, after being asked if she agreed with the Bush Doctrine, ABC News interview, Sept. 11, 2008 (Watch the raw, unedited video)~Compiled by Daniel Kurtzman