After a very early start (4am) amidst the worst rainstorm Auckland had seen since last winter, we were on the plane and Ethan was enjoying the first marvelous wonder of our Tongan holiday – “breakfast on a plane, how strange!”.

It was a short easy flight, 2.5 hrs to Tongatapu, the main island in the Tongan Kingdom. In what we were to come to expect as very typical island-style, our next flight to Ha’apai was not delayed, but brought forward 2 hours! Where on earth does that happen but in Tonga? The flight to Ha’apai was a short one, 45min, in the smallest plane any of us had flown on before – only 15 seats! The heat was insane though and Ethan fell asleep during the final 2 minutes of the descent, although we suspect he probably passed out from heat exhaustion. The views were unbelievable as we flew over the island chains, Ethan was glued to his window as the atolls and islands passed beneath us and he took almost as many pictures from the window as Dave and I did.

Upon arrival in Pangai, Tonga, our hosts Dave and Sally were waiting at the airport, and were were loaded into their truck within 5min of walking across the tarmac from the plane. It was a fairly quiet, 30min drive as Dave and Ethan and I were pretty gobsmacked at our surroundings. The one lane road, pretty much the only sealed road on both islands, is bordered on both sides, by dense jungle, dotted with banana and papaya trees and millions of coconut palms. A causeway connects Panagi to Foa Island where Matafonua Resort is located. Crossing this skinny, one lane link for the first time was quite breathtaking as it is barely above sea level, and the shallow coral reef is metres from the car. 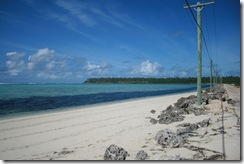 When we arrived at Matafonua Resort at 2pm we rushed to our Fale and we stoked to find out that we had been upgraded to the ‘family fale’ for free! Ethan would have his very own coconut palm-walled room complete with mosquito net for the next 5 days.

After we saw where we would be staying we literally ran to the beach and remained for the rest of the afternoon. I don’t think I have ever seen Ethan smile as big as he did that afternoon – well I did, but that came later in the trip…..

We dragged ourselves back from the beach to have a rest before dinner, which inevitably turned into exploration of the area surrounding our fale.  We found a scorpion, heaps of hermit crabs (the fales are all built on sand), coconuts and papayas right on our doorstep!  We enjoyed a wonderful dinner that night of fresh snapper and met the other guests, only 3 fales out of 10 were occupied so it was such a peaceful trip.  The Tongan trench was immediately to the east of our fale and the sound of the waves crashing on the atoll was like thunder, after we got used to that and the sound of falling coconuts we slept so well!