Jobs are for suckers and I feel like this job of mine has got in the way during these first holidays since I have been employed and also the LAST holidays with Ethan as a pre-schooler.  He has had a great time though, he has enjoyed sleepovers at his Nana’s, playdates, a birthday party, a theatre trip to see Jack & the Beanstalk and I have tried to treat him to a couple of special days this Wednesday and Thursday.

Yesterday we went to the Auckland Fish Market.  Why you ask?  Ethan is obsessed with fish, has been since he was 18 months old, it NEVER gets old for him.  Looking at dead fish on ice is just about the most amazing thing he could ever do, especially as you can even TOUCH THEM if you so desire, ‘go ahead’ I say, ‘no-ones going to care just don’t drop them because we can’t afford to pay for that ‘spensive snapper you’re fondling over there’.

After the excitement of the octopus post-mortem and the live eel tank we headed to the Auckland Museum for The Dangerous Museum for Boys and The Daring Museum for Girls activity hunt.  E is now the perfect age for this sort of activity, it was so much fun working our way through the activity book, finding the 6 most dangerous bugs in the museum, identifying the weapons and cracking the secret codes.

Today, I thought about what he would desperately LOVE to do, checked the tides, made some dough balls and we went fishing.  Or more accurately, we went casting, or went and dropped our line, or we practised what we should do in case we were faced with the possibility of catching fish.  Ethan didn’t care that he had nothing to show for three hours of little boy bliss, casting again and again, re-baiting his hook lovingly with the balls of dough he helped me roll out and narrating the whole experience with the skill and verbose lexicon of a well practised fisho.

Look at those things!  I would totally want to eat them up if I were a fish!  Best dough ball recipe yet and the nice thing was their texture, they stayed on the hook beautifully and weren’t sticky.

Then flavoring is optional: vanilla for carp, rum for catfish, Velveeta cheese for trout, yeah I skipped the flavouring because at best we were hoping for a sprat!

After I was totally cold and out of Coke Zero we headed home for a quick lunch before we went to the movies and saw UP.

Seriously, this is THE BEST animated film I have ever seen.  It was hilarious and every character was so real and endearing.  Amazing, amazing, amazing.  Ethan loved it, I have never seen him so totally on par with a movie, he laughed throughout the whole thing, asked questions and talked about what was going on, it was well worth the $22.   5/5

Play the movie and listen with your ears 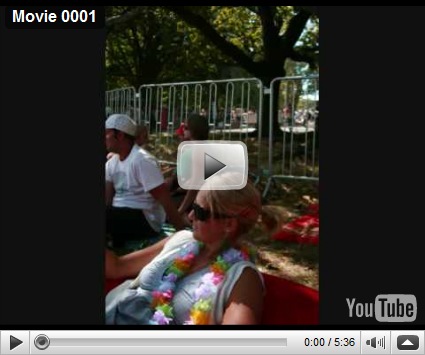 A Dave and Ethan Original.  An informative ditty detailing the perils of swimming in the Amazon without a protective cup.